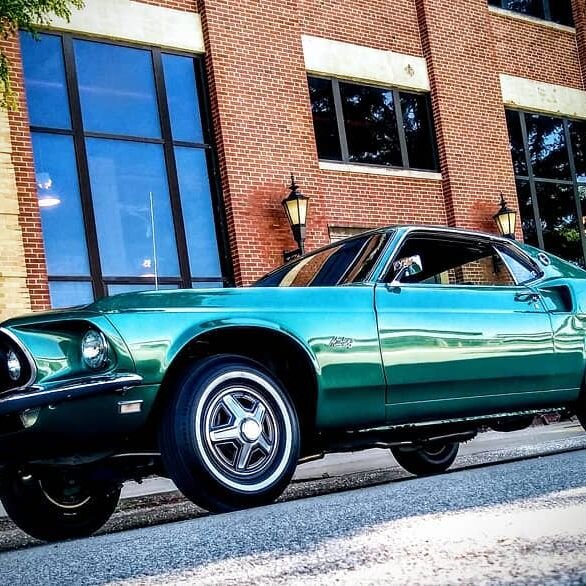 Before the Mustang Mach-E there was the little known and very rare Mustang E. Introduced in 1969 the special edition pony was introduced and designed to deliver the best fuel economy. A 250 cubic inch six-cylinder engine. You could not get air on this efficient model. Less than 100 were produced and as Donald Farr, veteran Mustang journalist would say, this is possibly the last of its kind in existence. Here to share his acquisition story, welcome Tim Wise to Ford Mustang The Early Years.

Do you own a early year Mustang?:

Please upload a favorite pic of your Mustang or a classic car you drive now or have owned in the past.: https://cdn.filestackcontent.com/gQWmZNtOTJGEg3JghNsb?FB_IMG_1543591660278.jpg?image/jpeg

I work for a coffee equipment company.  Various jobs but mainly preparing large orders of equipment to be shipped out of the country.

Maybellne.   After a song by Chuck Berry

My wife and I totally stripped the body of everything.  Every nut and bolt came out for replacement or restoration.  Paint stripped off to bare metal.  We gave it a concours restoration.  Parts that were unusable were replaced with NOS parts or OEM used parts when we find them or afford them.

Original email from Tim to our production team at the podcast:

I am new to listening to podcast and was very happy to hear that there was a station that focused on my favorite generation of Mustangs.  So I have listened to many of them and you have asked if anyone listening had a early Mustang and thought it would be a nice story then please contact you.

So, I am an average type of guy and my wife and I love all years of Mustangs and have owned them for the last 20+ years.  I would not have been considered a candidate for your podcast except for the fact that my wife and I own possibly the rarest 6 cylinder Mustang that has been produced.  It has been featured in several magazines including Mustang Times which Donald Farr called it possibly the last one in existence.  Most hardcore Mustang enthusiast have never heard of one let alone see one.  It is a Mustang special edition called a 1969 Mustang E’   You will most likely need to Google that.  When you do you will see a Silver Jade (green) Mustang and that will be ours.  It was built for a competition to be the most fuel efficient vehicle of its class.   Was told by a current Mustang engineer at Ford that it was an historic part of Ford’s quest to save fuel just like the Mach E this is the first generation version called Mustang E.    Another great part of our story is that the entire nut and bolt restoration was done in our home garage except for the engine machine work and the transmission rebuild.  Everything else, paint and body work, electrical suspension and I mean everything else was done by my wife and I.

Also,  my wife and I have a very interesting set of stories that came along with doing this build as both of us have a very very strong faith in our Lord Jesus Christ and his involvement with this very specific restoration.  I would love to share the entire history and purpose of why this special edition was a part of Ford and our personal experiences with this build if you are interested.  It has only been showed local and has done very well being shown.  It is show and magazine quality now as it had sat for 20+ years and was considered a basket case of a car.  Rust bucket is the best term.  I will include a few pictures to give you some idea of the car.  Thanks and please let me know either way that you decide.

Forgot to add:  this is a 250 ci six cylinder with a C4 auto transmission.  This is a concours build that includes all of the paint daubs and hand markings on the front and back suspensions.  I can send more photos if the ones supplied are not enough.