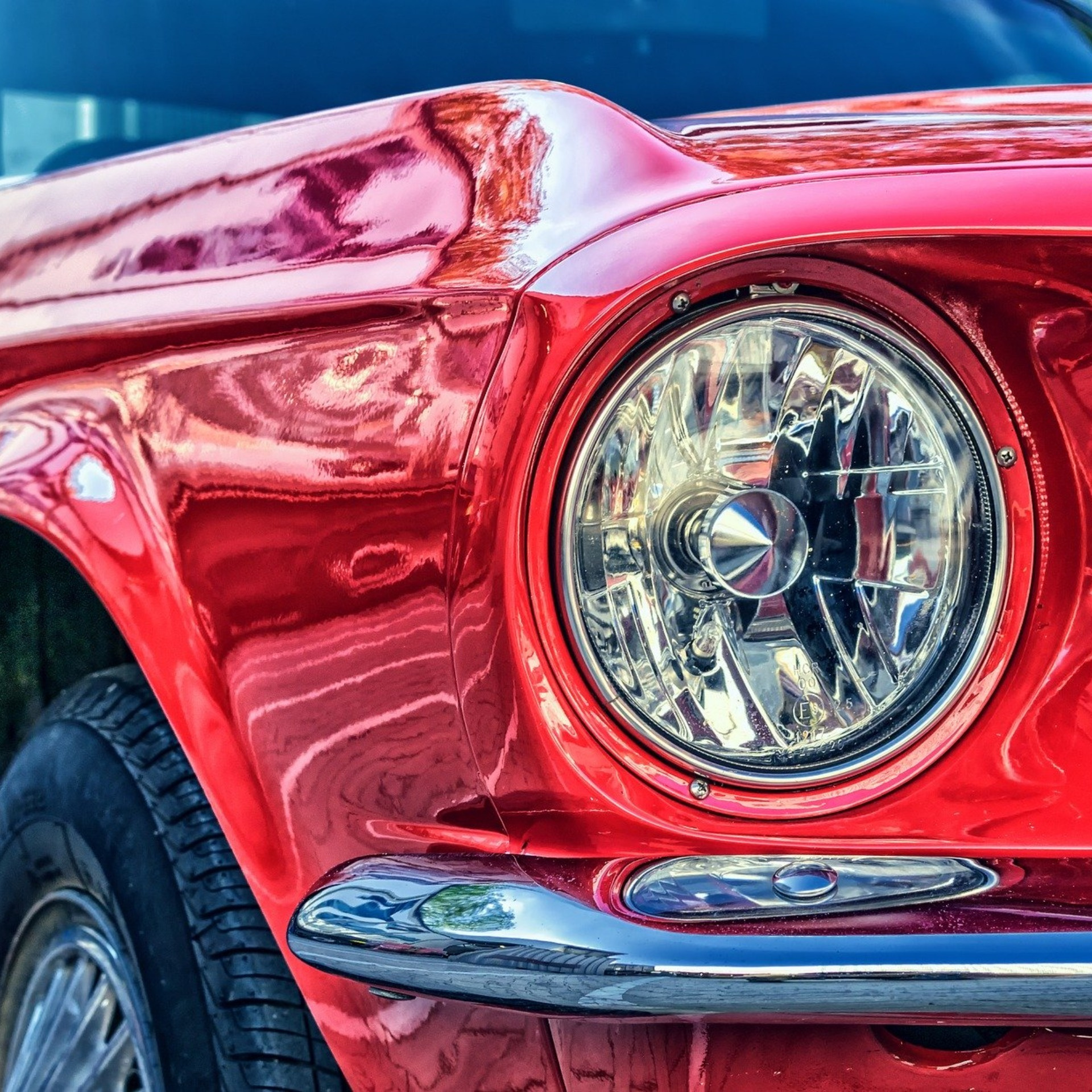 Michael Miller, southern California resident, former Detroit citizen is prepping to sit in as guest host. Check out today’s episode with Micheal, one of my favorite guests to sit in the interview chair. He has run through his share of Mustangs, classic and late model ponies.

History of Mustang (via Wiki) https://en.wikipedia.org/wiki/Vehicle_identification_number

Since it was introduced four months before the normal start of the 1965 production year and manufactured alongside 1964 Ford Falcons and 1964 Mercury Comets, the earliest Mustangs are widely referred to as the 1964½ model by enthusiasts.Nevertheless, all “1964½” cars were given 1965 U.S. standard VINs at the time of production, and – with limited exception to the earliest of promotional materials – were marketed by Ford as 1965 models. The low-end model hardtop used a “U-code” 170 cu in (2.8 L) straight-6 engine borrowed from the Falcon, as well as a three-speed manual transmission and retailed for US$2,368. Standard equipment for the early 1965 Mustangs included black front seat belts, a glove box light, and a padded dash board.Production began in March 1964 and official introduction following on April 17 at the 1964 World’s Fair. V8 models got a badge on the front fender that spelled out the engine’s cubic inch displacement (“260” or “289”) over a wide “V.” This emblem was identical to the one on the 1964 Fairlane.

Several changes to the Mustang occurred at the start of the “normal” 1965 model year in August 1964, about four months after its introduction. These cars are known as “late 65’s”. The engine lineup was changed, with a 200 cu in (3.3 L) “T-code” engine that produced 120 hp (89 kW; 122 PS). Production of the Fairlane’s “F-code” 260 cu in (4.3 L) engine ceased when the 1964 model year ended. It was replaced with a new 200 hp (150 kW) “C-code” 289 cu in (4.7 L) engine with a two-barrel carburetor as the base V8. An “A-code” 225 hp (168 kW; 228 PS) four-barrel carbureted version was next in line, followed by the unchanged 289 HiPo “K-code” equipped with a 4-barrel Autolite 4100 carburetor rated at 271 hp (202 kW; 275 PS) at 6000 rpm and 312 lb⋅ft (423 N⋅m) at 3400 rpm.The DC electrical generator was replaced by a new AC alternator on all Fords (a way to distinguish a 1964 from a 1965 is to see if the alternator light on the dash says “GEN” or “ALT”). The Mustang GT version was introduced as the “GT Equipment Package” and included a V8 engine (most often the 225 hp (168 kW; 228 PS) 289), grille-mounted fog lamps, rocker panel stripes, and disc brakes. In the interior the GT option added a different instrument panel that included a speedometer, fuel gauge, temp. gauge, oil pressure gauge and ammeter in five round dials (the gauges were not marked with numbers, however.)A four-barrel carbureted engine was now available with any body style. Additionally, reverse lights were an option added to the car from August 1964 production. The Mustang was originally available as either a hardtop or convertible, but during the car’s early design phases a fastback model was strongly considered. In 1965, the Shelby Mustang was born, it was available only in newly introduced fastback body version with its swept-back rear glass and distinctive ventilation louvers.

The standard interior features of the 1965 Mustang included adjustable driver and passenger bucket seats, an AM radio, and a floor mounted shifter in a variety of color options. Ford added additional interior options during the 1965 model year. The Interior Decor Group was popularly known as “Pony Interior” due to the addition of embossed running ponies on the seat fronts, and also included integral armrests, woodgrain appliqué accents, and a round gauge cluster that would replace the standard Falcon instrumentation. Also available were sun visors, a (mechanical) remote-operated mirror, a floor console, and a bench seat. Ford later offered an under-dash air-conditioning unit, and discontinued the vinyl with cloth insert seat option, offered only in early 1965 models. One option designed strictly for fun was the Rally-Pac. Introduced in 1963 after Ford’s success at that year’s Monte Carlo Rally and available on other Ford and Mercury compacts and intermediates, the Rally-Pac was a combination clock and tachometer mounted to the steering column. It was available as a factory ordered item for US$69.30. Installed by a dealer, the Rally-Pac cost US$75.95.A 14″ rim option was available for Rally-pac and GT350R vehicles widening front and rear track to 57.5″. Reproductions are presently available from any number of Mustang restoration parts sources. A compass, rear seat belts, A/C, and back-up lights were also optional.

The 1966 Mustang debuted with moderate trim changes including a new grille, side ornamentation, wheel covers and gas cap. Ford’s new C-4 “cruise-o-matic” three-speed auto transmission became available for the 225 hp V8. The 289 “HiPo” K-code engine was also offered with a c4 transmission, but it had stronger internals and can be identified by the outer casing of the servo which is marked with a ‘C’. The long duration solid-lifter camshaft that allowed the high revving 289 to make the horsepower it was known for, was not friendly for a low stall speed automatic torque converter. The “HiPo” could be spotted very easily by the 1-inch-thick (25 mm) vibration damper, (as compared to 1/2 inch on the 225-hp version) and the absence of a vacuum advance unit on the dual point distributor. With the valve covers off, there is a large letter “K” stamped between the valve springs, along with screw in studs (vs. a pressed in stud for other 289s) for the adjustable rocker arms. A large number of new paint and interior color options, an AM/eight-track sound system, and one of the first AM/FM mono automobile radios were also offered. It also removed the Falcon instrument cluster; the previously optional features, including the round gauges and padded sun visors, became standard equipment. The Mustang would be the best-selling convertible in 1966, with 72,119 sold, beating the number two Impala by almost 2:1.

The 1965 and 1966 Mustangs are differentiated by variations in the exterior, despite similar design. These variations include the emblem on the quarter-panels behind the doors. From August 1964 production, the emblem was a single vertical piece of chrome, while for 1966 models the emblem was smaller in height and had three horizontal bars extending from the design, resembling an “E”. The front intake grilles and ornaments were also different. The 1965 front grille used a “honeycomb” pattern, while the 1966 version was a “slotted” style. While both model years used the “Horse and Corral” emblem on the grille, the 1965 had four bars extending from each side of the corral, while on the 1966, these bars were removed. The 1966 model year saw introduction of ‘High Country Special’ limited edition, 333 of them were sold in Colorado, Wyoming, and Nebraska.

company had already registered the name for a truck.The German company offered to sell the rights for US$10,000. Ford refused and removed Mustang badges from exported units, instead naming the cars as T-5 (a pre-production Mustang project name) for the German market until 1979 when Krupp copyrights expired.